The National Languages Equality Advancement Project (NLEAP), supported by Global Affairs Canada, has been working closely with relevant local government actors, to fulfill the commitment of both Governments towards building language equality and sensitivity to the ethno-cultural diversity of Sri Lanka. NLEAP is pleased to commemorate the Official Languages Day and Canada Day with a special announcement. The National Languages Fund, administered by NLEAP, is pleased to announce the selection 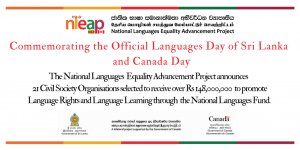 of 21 Civil Society Organisations to promote Language Rights and Language Learning in Sri Lanka. Through these selected projects, the fund has committed over Rs 148,000,000 (CAD 1.1 Million ) towards fostering acceptance by Sri Lankans of the culturally diverse and bilingual nature of their country, to promote national integration and reconciliation. The outreach of funds is anticipated to impact over two hundred thousand women and men. The selected project areas are wide and varied, facilitating, and promoting either Language Rights Promotion or Second Language Learning, or both.