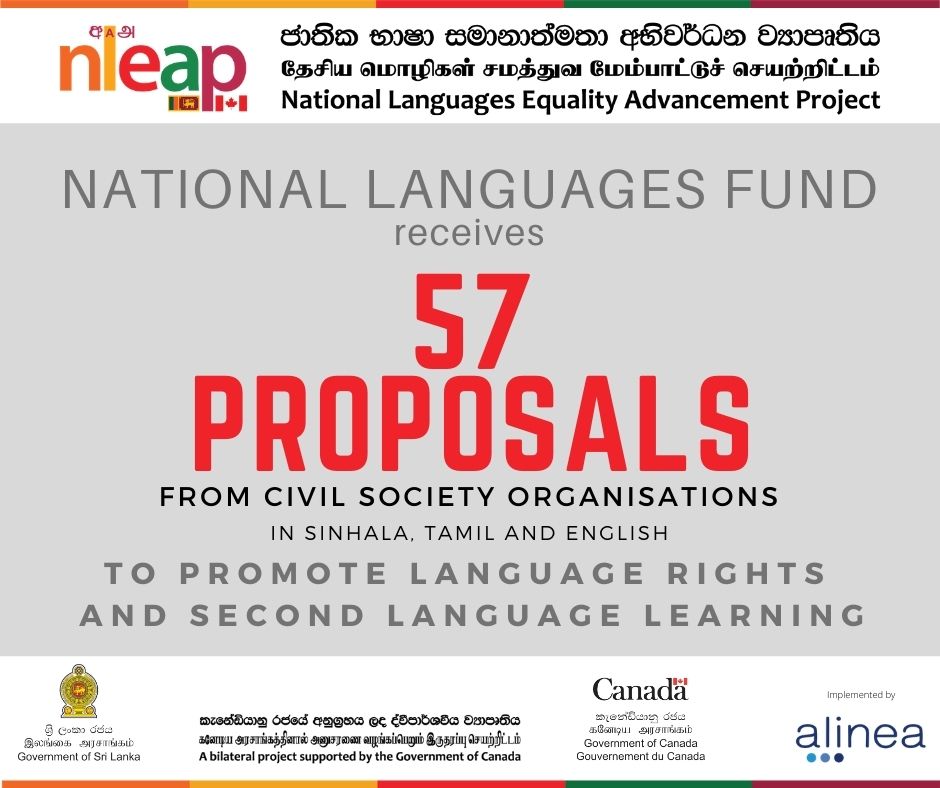 The National Languages Equality Advancement Project (NLEAP), supported by Global Affairs Canada, has been working closely with key government actors, to fulfill the commitment of the Government of Sri Lanka towards building language equality and sensitivity to the ethno-cultural diversity of Sri Lanka. Recently the National Languages Fund (NLF), administered by NLEAP, published its Second Call for proposals from Civil Society Organisations to promote Language Rights and Second Language Learning. NLEAP is pleased to announce the receipt of 57 proposals in response to the recently concluded NLF Call 02.  The diversity and creativity of the proposals received, as well as the significant number of proposals received in the Official Languages, is encouraging and noteworthy.

NLEAP is already supporting the activities being carried out by the 21 Civil Society Organisations selected in the NLF Call 1.  Through these selected projects, the fund has committed over Rs 148,000,000 (CAD 1.1 Million ) towards fostering acceptance by Sri Lankans of the culturally diverse and bilingual nature of their country. The outreach of funds is anticipated to impact over two hundred thousand women and men. The selected project areas are wide and varied, facilitating, and promoting either Language Rights Promotion or Second Language Learning, or both. How the projects can be implemented in a manner that also promotes Gender Equality and Women’s Empowerment has been accorded special attention. Despite challenges posed by COVID, the Call 1 projects are working towards meeting their project goals. Finding creative and meaningful ways to effectively mitigate and overcome the restrictions posed.

The selection of the Second Call projects will help NLEAP expand its outreach, as it leverages language rights and second language learning to build acceptance and appreciation of cultural diversity as a national strength.