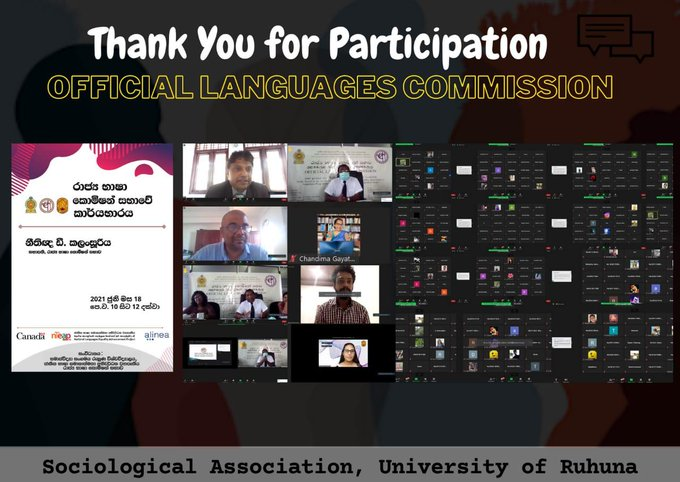 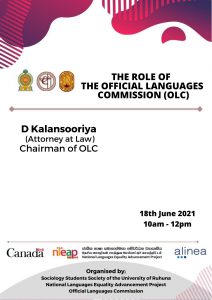 NLEAP was very happy to initiate, coordinate and support a webinar conducted by the University of Ruhuna related to the Official Languages Policy of Sri Lanka. It was an insightful and engaging session when the Sociology Student Society of the university invited the Chairman of the Official Languages Commission (OLC), D Kalansooriya (Attorney at Law) to speak to them on the role of the OLC. The webinar, attended by over 200 students from the universities of Ruhuna, Colombo, Kelaniya, and Sri Jayewardenepura kicked off with the welcome address by the head of the Sociology department Dr. Suranjith Gunasekera. Thereafter an interesting and thought provoking keynote address was presented by the Vice Chancellor of the University of Ruhuna, Senior Prof. Sujeewa Amarasena.

The Vice Chancellor’s address set the stage for OLC Chairman’s presentation by putting forth a question that he set forth to all medical students. “ Whose responsibility is it to ensure that a citizen walking in for medical attention is able to access care and services in a language he or she understands?” With evocative examples which demonstrated that it was vital that every public servant see it as their individual responsibility to be bilingual.

He handed over to the Chairman of OLC who not only shared insight into the legal framework of Sri Lanka that sets forth Sinhala and Tamil as the Official Languages, but also the role that OLC plays in ensuring the effective implementation of the Official Languages Policy (OLP) of Sri Lanka. Most insightful were the practical examples shared by Mr. Kalansooriya of the recent interventions that OLC has been involved in to ensure that the Official Languages Policy of Sri Lanka was adhered to. The Q&A session that followed Mr. Kalansooriya’s presentation created a forum for the participating students to further clarify their understanding of the OLP, further proving their interest in this all important topic. Working together with the OLC and other government institutions to promote such a dialogue about the OLP is critical to the role NLEAP plays as a bilateral project, funded by the Government of Canada, committed to promoting the equality between Sri Lanka’s Official Languages – Sinhala and Tamil. NLEAP will continue engage with the young generation, the future of our country, to build awareness and advocacy for the equality of the Official Languages. 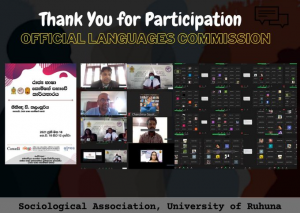