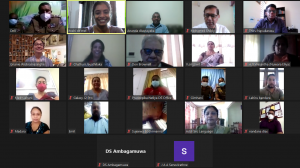 It was a long planned, and long-awaited day, when the National Languages Division(NLD) of the Ministry of Public Services, Provincial Councils and Local Government organised its inaugural Language Planning Meeting with 8 Public Institutions representing the Nuwara Eliya District in the Central Province. This preliminary discussion held online, marks the first step towards the development of 30 sub national institutions islandwide, as the ‘model institutions’ in the development and implementation of Language Plans. Improving the capacity of key ministries to deliver public services in both official languages (Sinhala and Tamil) at national and provincial levels, especially in bilingual communities is an integral component of Official Languages Policy Implementation Strategy Framework. As part of this strategy NLEAP will partner the NLD to support selected key ministries and institutions including Provincial Councils, Districts and Divisional Secretariats (especially Bilingual DS Divisions) and Local Authorities to prepare Language Plans and strengthen their Language Committees, with a specific focus on considerations impacting women.

In her welcome address the Ms. R. Wijialudchumi (Additional Secretary – National Languages Division, Ministry of Public Services, Provincial Councils and Local Government) shared that this inaugural meeting marked the first step in the Ministry’s Long-term plan and strategy to support 30 Government Institutions selected from bi-lingual zones to model the development of Language Plans. Effective development and implementation of Language plans would strengthen and build the capacities of these institutions to deliver efficient/effective services to the public, in the language of their choice. She thanked and congratulated the 8 institutions joining the Inaugural Meeting for their willingness and commitment to be examples to the rest of the Country, assuring the Institutions of the continued support of the Ministry every step of the way. Mr. Ananda Dissanayake (NIPA- Nuwara Eliya), identifying Nuwara Eliya as a Tri-lingual Community, foresaw this Language Planning initiative as building stronger on a foundation laid as far back as 2002. He envisioned a future where the public of the Nuwara Eliya District, with its rich diversity of ethnicity, religion, culture, language and gender, would receive and enjoy the required public services in any one of the three languages of their choice. Be it the official languages of Sinhala and Tamil or the Link Language of English. Ms. Sujeewa Bodhimanna, Additional Secretary, District Secretariat, Nuwara Eliya, thanked the ministry and NLEAP for the support given to the Nuwara Eliya District as a bilingual district. As she noted ‘It is more than language training, it is a long term programme that will be more fruitful’, seeing the programme enabling the selected Public Institutions to offer the people of Nuwara Eliya district the best possible service in the language of their choice. Mr Don E. Brownell (Project Director NLEAP), assured the participants of the continued support of the Government of Canada to the Government of Sri Lanka in the successful implementation of their Official Languages Policy.  He also assured them of the continued support of NLEAP, as a project specifically designed to meet the needs of institutions such as their own that were critical to the successful implementation of the Official Language Policy across the island. All of the participants representing the selected Institutions were single minded in their commitment and support to the successful development and implementation of Language Plans.

The 8 State institutions representing the Central Province of Sri Lanka