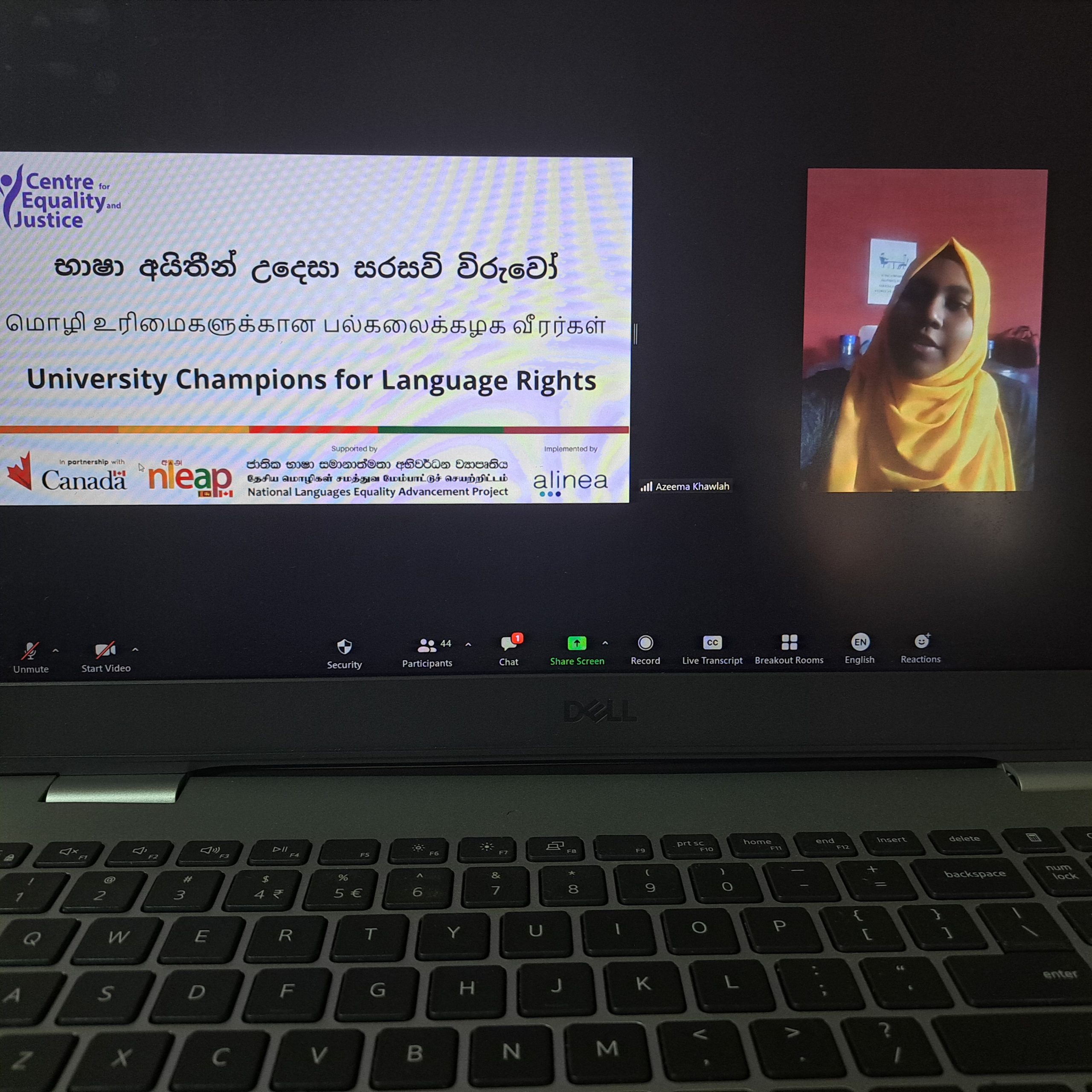 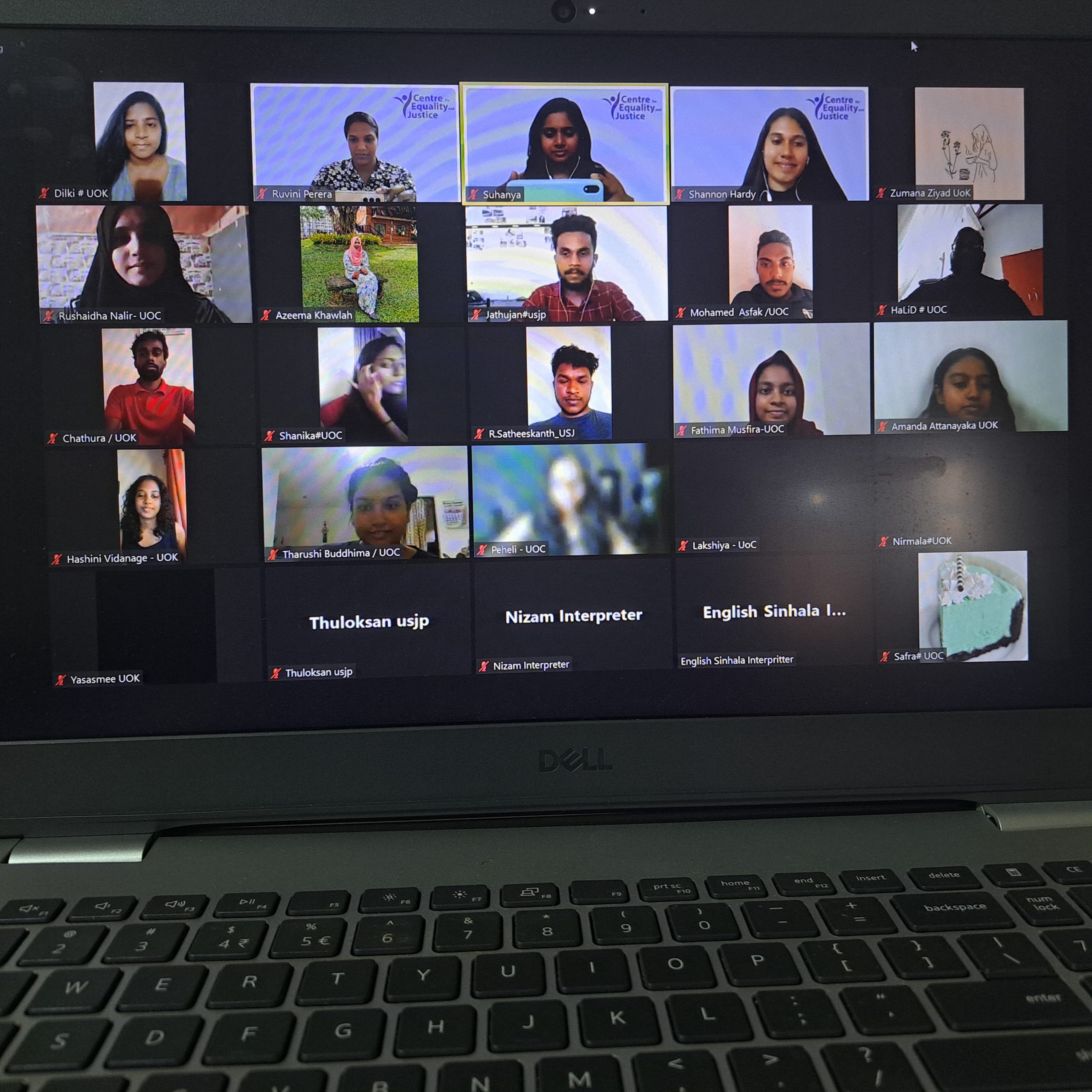 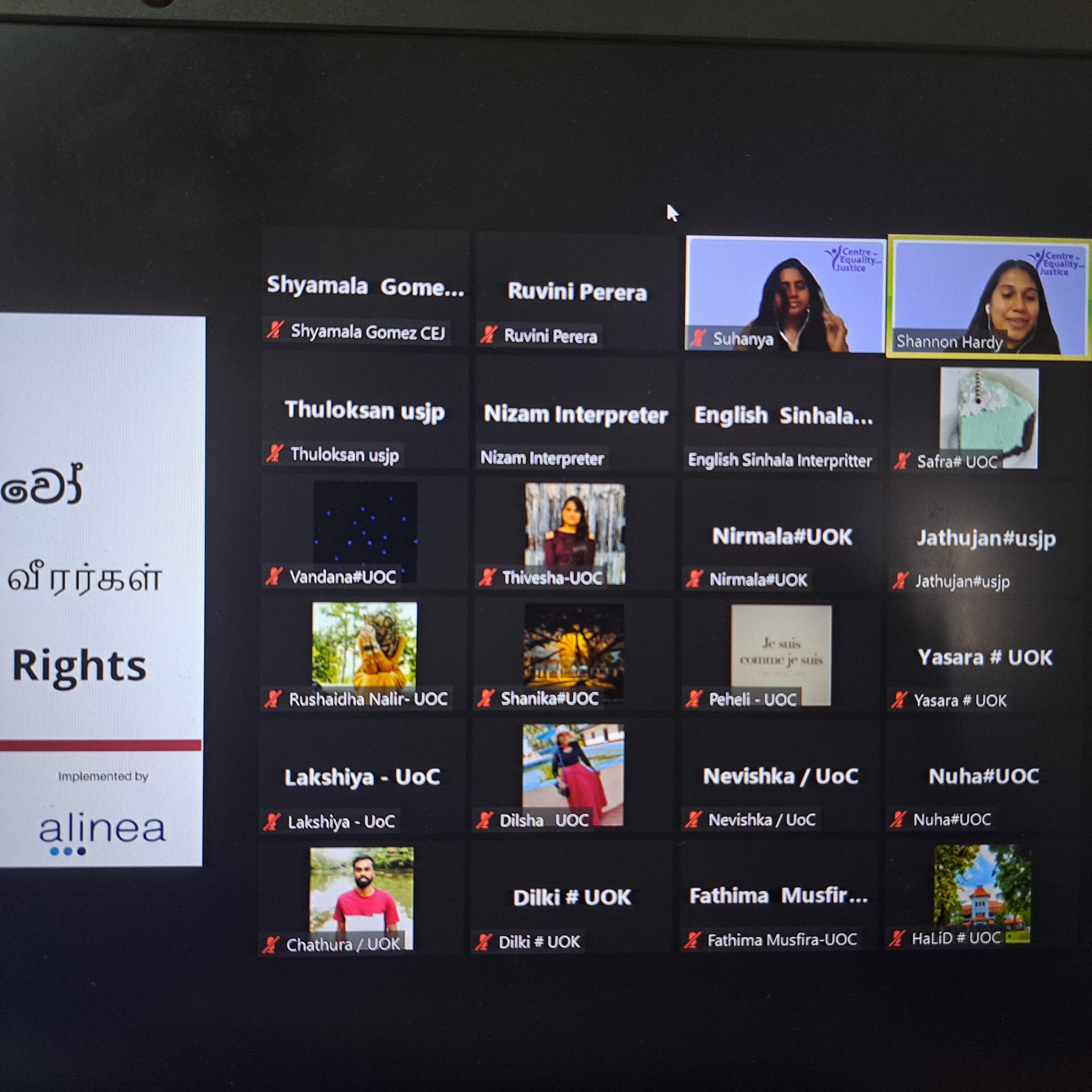 NLF Partner, Centre for Equality and Justice (CEJ) recently conducted a virtual orientation on the 15th of June for university students who signed up as University Champions for Language Rights. The recently formed coterie of Language Champions comprised 34 undergraduates representing the Universities of Colombo, Kelaniya and Sri Jayawardenapura, and three of their student coordinators. The interactive briefing session gave the Language Champions a concise overview of the project, the proposed activities and the role they would play as fully resourced Language Rights Advocates.

Over the years, CEJ has been promoting Gender Justice, Women and Transitional Justice, Women, Peace and Security, Sexual and Gender Based Violence.  Under the NLF Project, ‘War Affected Women and the Language Barrier : University Champions for Language Rights’ CEJ seeks to engage and empower University Students to advocate for the Language Rights of one of the most vulnerable groups in our nation, War Affected Women.  The CEJ project will be led by 80 Language Champions representing the three universities. As advocates for Language Rights these students will be resourced by CEJ to lead public and policy discourse on the importance of upholding the Language Rights of women affected by war. The knowledge and experience the Language Champions gain through CEJ will equip them to advocate for the effective implementation of the OLP.

The youth in our country account for 4.4 million of the population. CEJ see huge opportunity in harnessing the potential of these youth to lead the charge on Language Rights. As opinion leaders, agents of change and catalysts of social cohesion and peace building, these future leaders of Sri Lanka can play a pivotal role in addressing disparities exacerbated by Language Rights Violations. As language rights’ advocates the students will be capacitated to influence dialogue on Language Rights amongst their peers and government officials. By promoting Language Rights as being vital for national integration and reconciliation the Language Champs can be instrumental in bridging the ethno-linguistic divides identified amongst Sinhala and Tamil students in the local universities. Sound knowledge of the Official Languages Policy will also empower the Language Champions to use their collective voice to influence policy reforms.

The CEJ project comes at a significant chapter in Sri Lanka’s history. More than ever before the youth of Sri Lanka have realized the power and potential of their collective voice to positively impact and influence the policy making of our nation. NLEAP looks forward to seeing these Language Champions acting as catalysts in energizing their peers and policy makers to advocate the effective implementation of the Official Languages Policy.