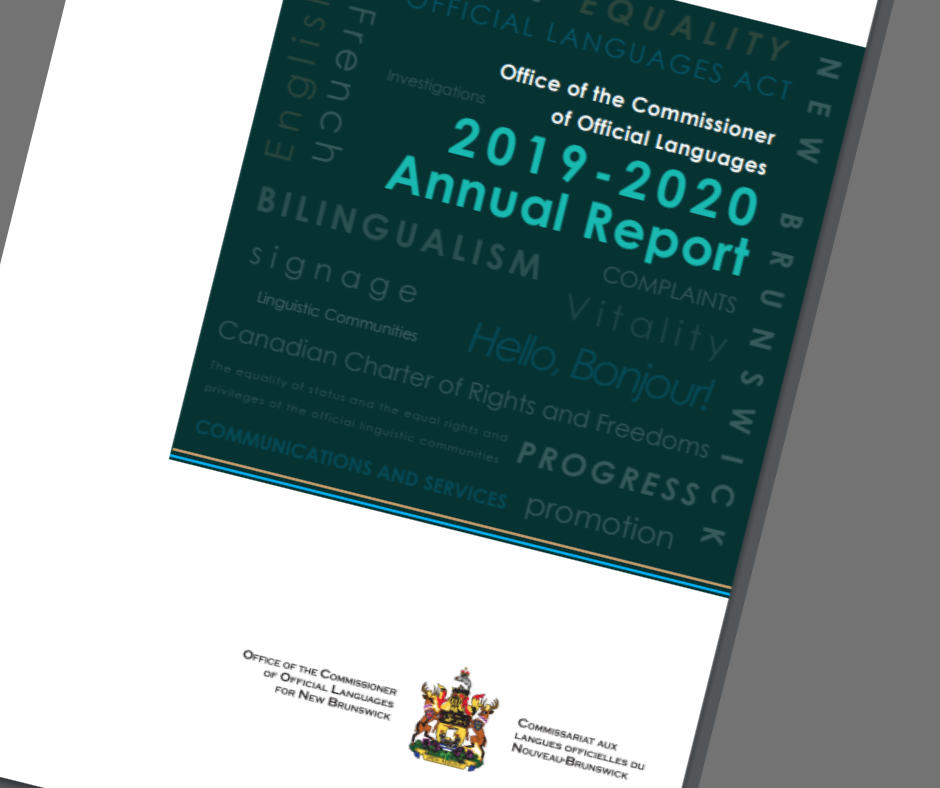 The Annual Report of the Commissioner of Official Languages for the province of New Brunswick takes a very public-friendly approach. The Report opens with a Forward which provides a summary of the Official Languages Act of New Brunswick, as well as the scope of its application. A brief Message from the Commissioner follows with a very personal introduction of the new Commissioner, and a presentation of the mission and responsibilities of the Commissioner’s Office. An Overview of the proposed amendments to the revised 2002 Official Languages Act, based on past investigations and studies, with a series of specific recommendations follows. A section entitled Compliance with the Official Languages Act deals with complaints and the resolution process, provides statistical tables on admissible complaints received and acted on by region, by service type and by institutions during the period of April 2019 to March 2020, followed by a descriptive Summary of Action taken in response to complaints from specific institutions. A section entitled Legal Matters presents a court case related to the respect of minority language rights in the area of education in the province of British Columbia; initiated in 2010 by the French Language School Board and a Parents Association who filed a court case against the Province of British Columbia claiming that the provincial education system does not provide adequate and equitable funding to the French language minority schools; the case went from the Provincial Court, to the Court of Appeal and finally to the Supreme Court where a decision in favour of the School Board was pronounced in 2019; the SC decision will have jurisprudence in similar cases in Canada. A final section, Promoting the Advancement of the Official Languages, deals in particular with the production of two series of promotional videos, in the context of the 50th anniversary of the Official Languages Act, shared online and subsequently broadcasted on television.